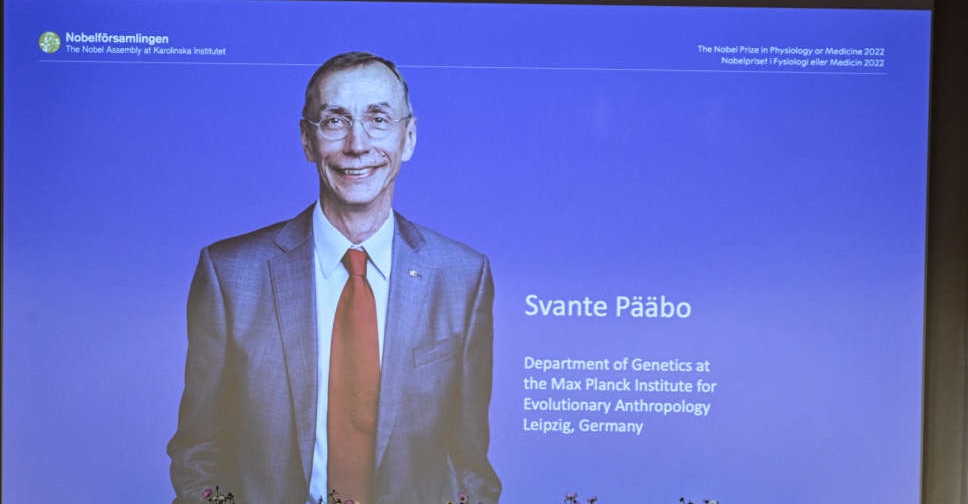 Swedish geneticist Svante Paabo won the 2022 Nobel Prize in Medicine on Monday for discoveries that underpin our understanding of how modern day humans evolved from extinct ancestors.

The prize, arguably among the most prestigious in the scientific world, is awarded by the Nobel Assembly of Sweden's Karolinska Institute and is worth 10 million Swedish crowns ($900,357).

It is the first of this year's batch of prizes.

The Award committee officially gave Paabo the prize for "discoveries concerning the genomes of extinct hominins and human evolution".

Thomas Perlmann, secretary for the Nobel Committee for Physiology or Medicine, who called Paabo with the news, said: "he was overwhelmed, he was speechless. Very happy.

Paabo, son of the Nobel Prize-winning biochemist Sune Bergstrom, has been credited with transforming the study of human origins after developing approaches to allow for the examination of DNA sequences from archaeological and paleontological remains.

His key achievements include sequencing an entire Neanderthal genome to reveal the link between extinct people and modern humans.

He also uncovered the existence of a previously unknown human species called the Denisovans, from a 40,000-year-old fragment of a finger bone discovered in Siberia.

"A scientist who helps us to better understand our own species - and is rightly recognised for it today," German education and research Minister Bettina Stark-Watzinger tweeted on Monday.

Created in the will of Swedish dynamite inventor and wealthy businessman Alfred Nobel, the prizes for achievements in science, literature and peace have been awarded since 1901, though the economics prize is a later addition.

The COVID-19 pandemic has placed medical research centre stage with many expecting that the development of the vaccines that have allowed the world to regain some sense of normality may eventually be rewarded.

Still, it typically takes many years for any given research to be honoured, with the committees charged with picking the winners looking to determine its full value with some certainty amongst what is always a packed field of contenders.

When asked why the prize was not awarded to advances in combating COVID, Perlmann said it was a good question he was not going to answer.

"We only talk about people who are getting the Nobel Prize and not those who are not receiving or not received them yet."

Paabo's most cited paper in the Web of Science was published in 1989, with 4,077 citations, said David Pendlebury, from UK-based scientific data analytics provider Clarivate.

Clearly, the Nobel Assembly decided this revolutionary research in genetics and evolution fell within the range of topics that should be recognized, he added.

"It is, however, not an award for a discovery relevant to clinical medicine, which many anticipated this year after a Nobel Prize focusing on physiology last year."

Nils-Goran Larsson, chair of Nobel Committee for Physiology or Medicine, said the committee had wanted to surprise people with who they awarded.

This year's festivities mark the return of the Nobel banquet in Stockholm after a two-year hiatus due to the pandemic, an event redolent of old-world pomp and glamour after years of social distancing.

Last year's medicine prize went to Americans David Julius and Ardem Patapoutian for the discovery of receptors in the human skin that sense temperature and touch, converting the physical impact into nerve impulses. Read full story

Past winners in the field include a string of famous researchers, notably Alexander Fleming, who shared the 1945 prize for the discovery of penicillin, and Robert Koch, who won already in 1905 for his investigations of tuberculosis.