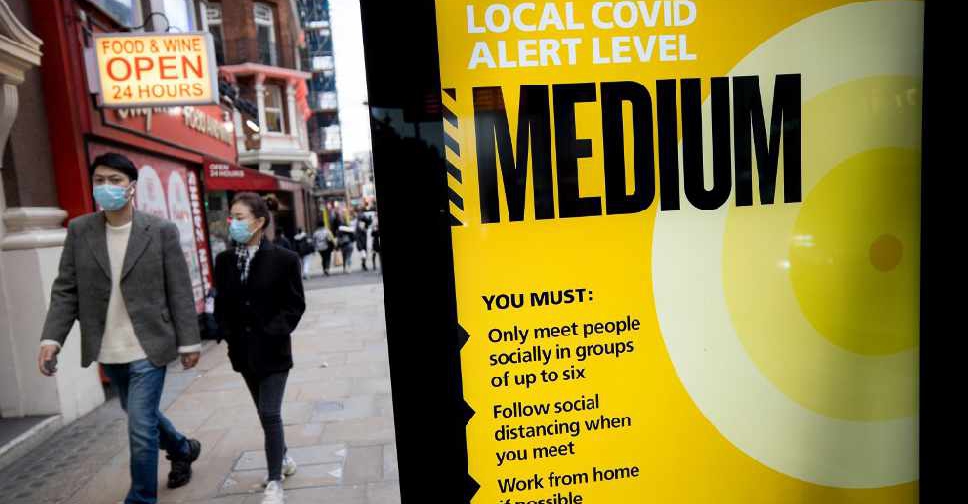 London is heading for a tighter COVID-19 lockdown from midnight on Friday as Prime Minister Boris Johnson tried to tackle a swiftly accelerating second coronavirus wave.

The disease, which emerged in China last year and has killed over a million people worldwide, is spreading in most parts of the United Kingdom, whose official death toll of 43,155 is the highest in Europe.

Anger, though, is rising over the economic, social and health costs of the biggest curtailment of freedoms since wartime: one former government adviser warned some people would have trouble clothing their children soon.

Health Secretary Matt Hancock will address parliament at around 1030 GMT: he is expected to announce changes to the government's patchwork of three-tier local lockdowns.

London will move to "high" alert level from "medium" at midnight on Friday, The Times reported.

"It is my expectation that the government will today announce that London will shortly be moving into tier 2 or the high alert level of restrictions," added mayor Sadiq Khan, saying nobody wanted the measures but action had to come fast.

"I must warn Londoners: We've got a difficult winter ahead."

In the capital, a global financial centre rivalled only by New York, 11 boroughs are seeing more than 100 new cases a week per 100,000 people. The worst-hit areas are Richmond, Hackney, the City of London, Ealing, Redbridge and Harrow.

Meanwhile, Manchester could also move to "very high" from "high".

Johnson, who won a landslide election in December, says his government is fighting a war against the virus and that some sacrifices are necessary to save lives.

But opponents say the government was too slow to act when the virus first struck, failed to protect the elderly in care homes, and bungled the testing system.

In areas in the high alert level, socialising outside households or support bubbles is not allowed indoors though work can continue and schools continue to operate.

The "very high" alert level forbids socialising, forces pubs and bars to close and prohibits travel outside the area.