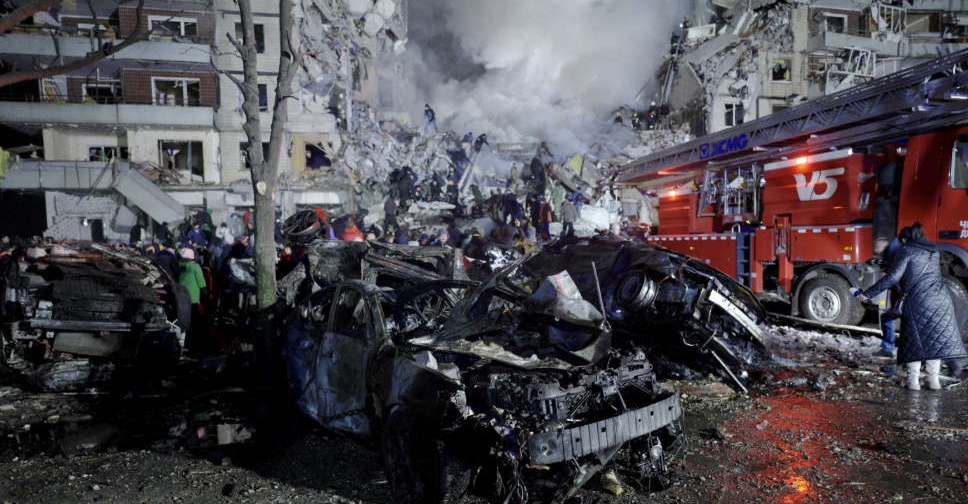 The death toll from a Russian missile strike on an apartment building in the Ukrainian city of Dnipro climbed to 21 on Sunday, as rescue workers raced to dig through a huge pile of debris in search of survivors.

At least 35 people were still missing and 73 were injured, Mykola Lukashuk, head of the regional council, wrote on the Telegram messaging app.

The building in Dnipro, a city in east-central Ukraine, was partly destroyed during a series of attacks on Saturday, Russia's largest wave of strikes in two weeks. There was no immediate comment from Moscow about the attacks.

Rescuers toiled through the night searching for survivors. On Sunday morning, they could be seen punching and kicking through heaped mounds of smashed concrete and twisted metal.

Emergency workers said they had heard people screaming for help from underneath piles of debris and were using moments of silence to help direct their efforts.

Lukashuk said 38 people had been rescued as of Sunday morning, including six children.

A spokesperson for Ukraine's southern command also told local television on Sunday that Russia had fired only half of the cruise missiles it had deployed to the Black Sea during Saturday's attacks.

"This indicates that they still have certain plans," said the spokesperson, Natalia Humeniuk. "We must understand that they can still be used."

The strikes on Saturday also hit critical infrastructure in Kyiv and other places. Officials warned this would restrict power supply for the capital and large swathes of the country over the next few days.

Russia, which invaded Ukraine last February, has been pounding the country's energy infrastructure with missiles and drones since October, causing sweeping blackouts and disruptions to central heating and running water.

In his evening video address on Saturday, President Volodymyr Zelenskiy issued a fresh appeal to his Western allies for more weaponry to end "Russian terror" and attacks on civilian targets.

Saturday's attack came as Western powers consider sending battle tanks to Kyiv and ahead of a meeting of Ukraine's allies in Ramstein in Germany next Friday, where governments will announce their latest pledges of military support.

On Saturday, Britain followed France and Poland with promises of further weapons, saying it would sent 14 of its Challenger 2 main battle tanks as well as other advanced artillery support in the coming weeks.

The first despatch of Western-made tanks to Ukraine is likely to be viewed by Moscow as escalation of the conflict. The Russian Embassy in London said the tanks would drag out the confrontation.

Germany is now expected to come under pressure to follow suit as Kyiv continues to plea for advanced military equipment.

Russian President Vladimir Putin launched the invasion on Feb. 24, saying Kyiv's ties with the West threatened Russia's security. Ukraine and its allies call it an unprovoked war to seize territory.

The conflict has killed thousands, displaced millions and turned many cities into rubble.