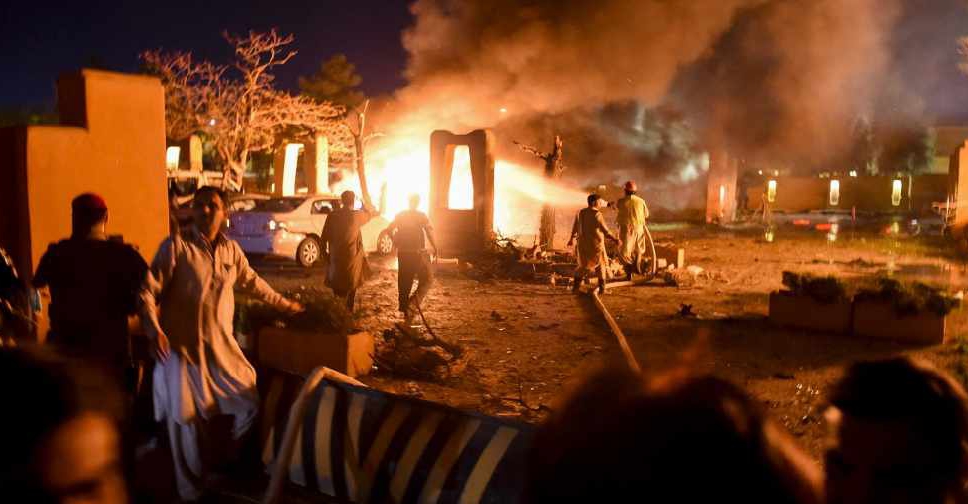 A car bomb blast late on Wednesday ripped through a luxury hotel's parking area in the southwestern Pakistani city of Quetta, killing four people and wounding 11 others.

China's ambassador to Pakistan was staying at the hotel, but was not there when the bomb exploded, said Pakistan's interior Minister, Sheikh Rashid Ahmad.

"An explosion has rocked the parking area of the Serena Hotel," police official Nasir Malik told Reuters, saying 11 people had been wounded.

An official at a local civil hospital, Waseem Baig, said four people had died, and "several others are in critical condition".

"A car that was full of explosives exploded in the hotel," Ahmad told local ARY News TV.

The Pakistan Taliban has claimed responsibility for the bombing.

"It was a suicide attack in which our bomber used his explosives-filled car in the hotel," a spokesman for the militant group Tehreek-e-Taliban Pakistan (TTP) wrote in a text message to a Reuters reporter.

Chinese Ambassador Nong Rong had earlier in the day met provincial Chief Minister Jam Kamal in the city, according to a tweet from the provincial government spokesman, Liaquat Shahwani.

Lango told reporters: "I just met him. He is in high spirits," adding the envoy would complete his visit to Quetta on Thursday.

The Chinese Embassy did not respond to a request for comment.

The well-fortified hotel is next to the Iranian Consulate and the provincial parliament building.

Quetta is the capital of the mineral-rich southwestern Balochistan province bordering Iran and Afghanistan, which has long been the scene of a low-level insurgency by local nationalists, who want more of a share in the regional resources.

The province is home to the newly expanded Gwadar deepwater port that is key to a planned $65 billion investment in China's Belt and Road Initiative economic corridor.

It was not clear whether the envoy or members of his delegation were a target of the attack, but Chinese nationals and their interests in the region have been attacked before by Taliban militants and nationalist insurgents.