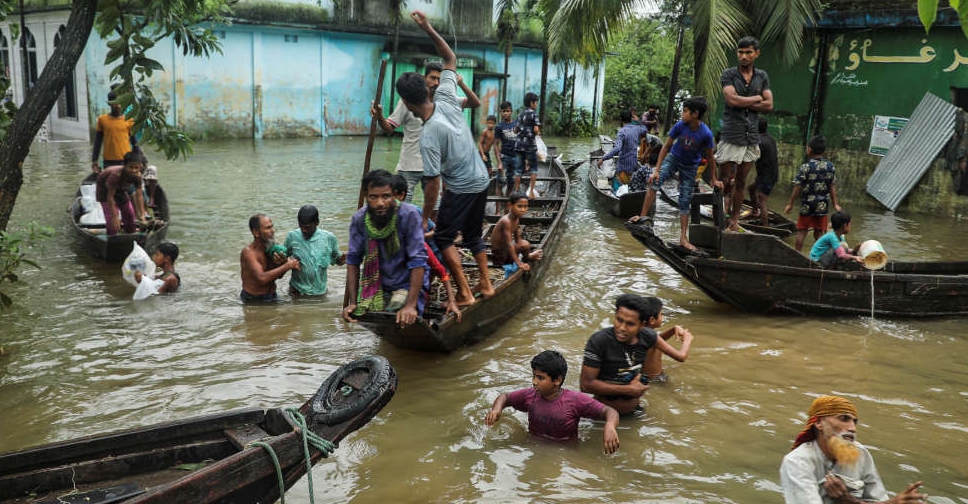 Authorities in Bangladesh intensified efforts on Wednesday to deliver food and drinking water to millions of people struggling after heavy rain unleashed catastrophic flooding across a quarter of the country.

Bangladesh is considered one of the world's most climate-vulnerable countries, with a 2015 analysis by the World Bank Institute estimating about 3.5 million Bangladeshis are at risk of river flooding every year.

On Wednesday, at least 17 of the country's 64 districts, mostly in the north and north eastern Sylhet region, were reeling from the natural disaster.

Authorities said at least 36 people had been killed and about 4.5 million people stranded so far. The floods are also threatening to disrupt agriculture, infrastructure, and clean water supply.

Sylhet region is among the worst affected, with several areas also without electricity.

"We are making frantic efforts to ensure there is food and drinking water for all the affected people," said Atiqul Haque, director general of Bangladesh's Department of Disaster Management.

"Many people are in dire need of food and drinking water," said Enam Ahmed, 45, a resident in worst-hit Sunmaganj district.

"There is water everywhere but no drinking water. Flood shelters were crammed with people but they are not getting enough food," he said.

The crisis in Bangladesh has been worsened by rainwater cascading down from the surrounding hills of India's Meghalaya state, including some of world's wettest areas like Mawsynram and Cherrapunji, which each received more than 970mm (38 inches) of rain on Sunday, according to government data.

In India's Assam state, at least seven people were killed in the last 24 hours, taking the toll to 44 during the current wave of flooding that began about a fortnight ago, officials said.

India's National Disaster Management Force said in a statement that 14 teams with more than 70 boats and over 400 men were pressed into action in the heavily flooded districts of Assam.

The team had brought about 14,200 people trapped in the floods to safe places.

About 5.5 million people have been displaced, of which about 3.7 million are staying in government-run makeshift shelters on raised embankments or other higher ground.

Locals in the flood-affected areas said they had never witnessed such large-scale devastation caused by rain, and they could soon be facing shortages of essential items.