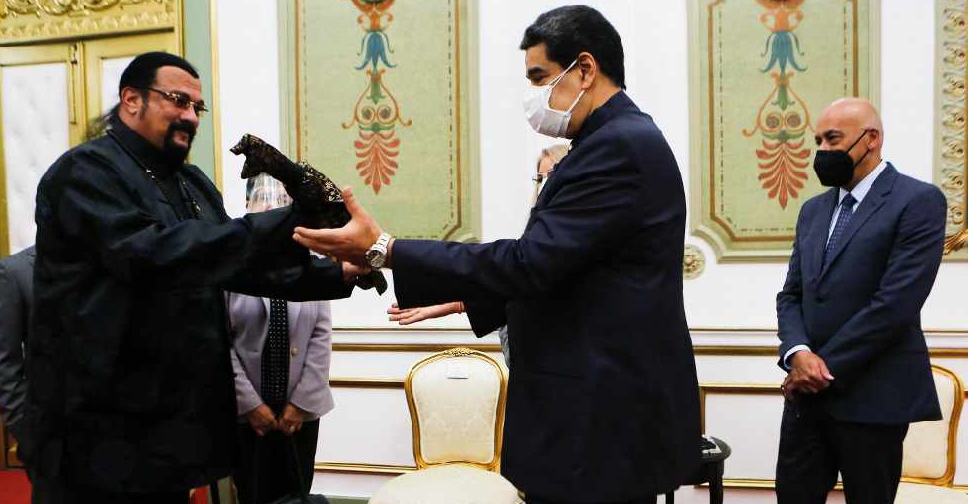 Venezuelan President Nicolas Maduro received a samurai sword as a gift from actor Steven Seagal, who was visiting the South American country as a representative of Russia.

Maduro, wearing a white facemask and a traditional Venezuelan black long sleeve shirt known as a liqui liqui, positioned the sword over his shoulder as Seagal nodded and pointed in affirmation, the images broadcast from the Miraflores presidential palace in Caracas showed.

"The Venezuelan head of state maneuvers after drawing the sword," a state television narrator said, calling the weapon a "symbol of leadership".

"I had a very friendly, affectionate encounter with Steven Seagal," Maduro said on Wednesday in a broadcast on television in which he referred to the US actor as "my brother".

"We talked about mutual friends like the President of Russia, Vladimir Putin, because of his interest in protecting forests," he said.

Maduro added that Seagal was in Canaima on Wednesday, a national park in the country's southern Bolivar state, accompanied by Venezuela's minister of indigenous peoples.

"We are going to shoot a movie together that will be called 'Nico Ma Duro de tumbar,' a wordplay on his name meaning 'Nico Ma is hard to knock down,'" Maduro continued.

"It is the new Steven Seagal film. We are going to fight the demons, the bad guys. I am 'Nico.'"

Seagal, an American-born martial artist, is best known for producing and starring in action movies.

He has long been a public admirer of Russian President Vladimir Putin, a fan of martial arts.

In 2016, Putin granted Seagal Russian citizenship and presented him with a passport, and in 2018 Russia tasked him with improving ties between Moscow and Washington.

Maduro is labelled a dictator by the United States and many other western nations, who accuse him of violating human rights and rigging his 2018 re-election. But he has remained in power in part thanks to ongoing support from Russia, which has called on Washington not to meddle in Caracas' internal affairs.