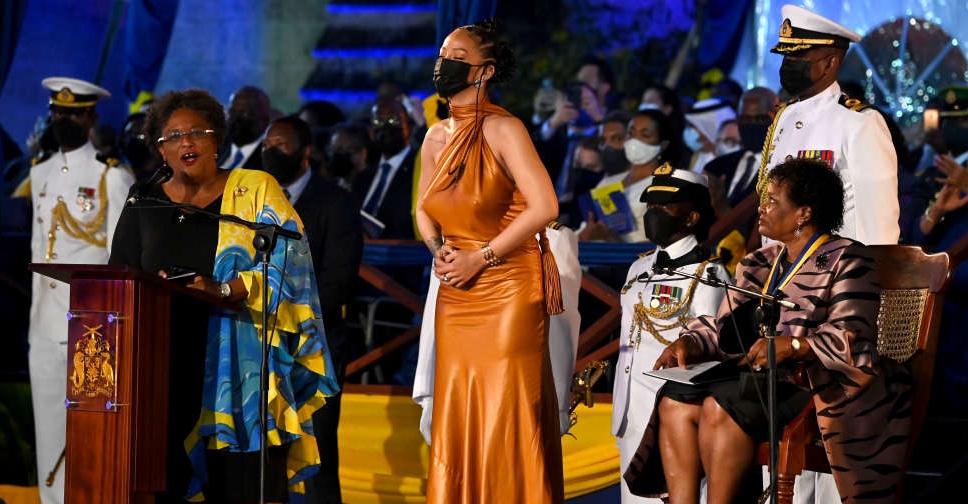 Barbados declared singer Rihanna a national hero at its republican celebrations in her hometown of Bridgetown.

Prime Minister Mia Mottley announced that the 33-year-old would be conferred with the honour of National Hero of Barbados to cheers.

Rihanna was called up before the crowds to be congratulated by Mottley.

"May you continue to shine like a diamond and bring honour to your nation by your works, by your actions," Mottley told Rihanna, a reference to her 2012 chart-topping single Diamonds.

On Tuesday, Barbados ditched Britain's Queen Elizabeth as head of state, forging a new republic with its first-ever president.

At the strike of midnight, the new republic was born to the cheers of hundreds of people lining Chamberlain Bridge in the capital, Bridgetown. A 21 gun salute fired as the national anthem of Barbados was played over a crowded Heroes Square.

Prince Charles, heir to the British throne, stood somberly as Queen Elizabeth's royal standard was lowered and the new Barbados declared, a step which republicans hope will spur discussion of similar proposals in other former British colonies that have the Queen as their sovereign.

"We the people must give Republic Barbados its spirit and its substance," President Sandra Mason, the island's first president, said. "We must shape its future. We are each other’s and our nation’s keepers. We the people are Barbados."

Barbados casts the removal of Elizabeth II, who is still Queen of 15 other realms including the United Kingdom, Australia, Canada and Jamaica, as a way to finally break with the demons of its colonial history.

"The creation of this republic offers a new beginning," said Prince Charles, whose mother sent her warmest wishes.

"From the darkest days of our past and the appalling atrocity of slavery which forever stains our history, people of this island forged their path with extraordinary fortitude."