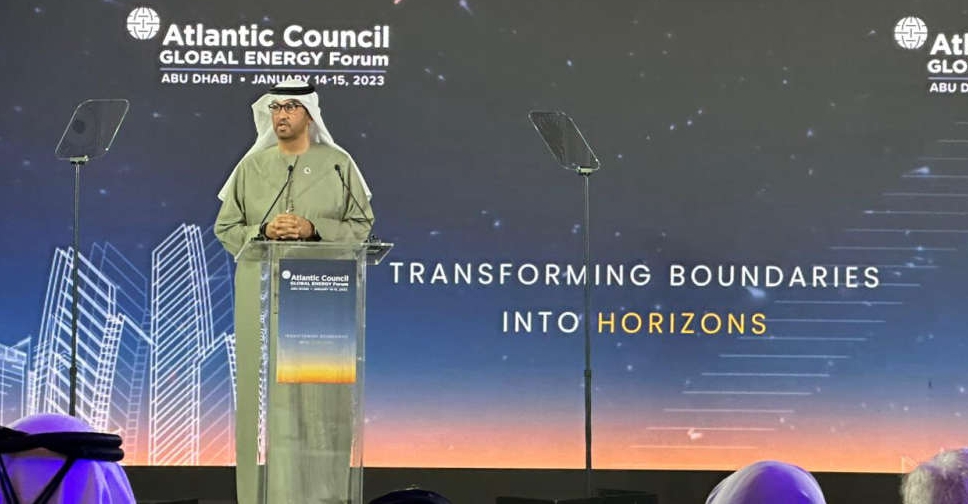 In his first speech since being appointed as COP President-Designate, Dr Sultan bin Ahmed Al Jaber emphasised the need for an inclusive, action-oriented approach to transform systems in the fight against climate change.

Speaking at the Atlantic Council Global Energy Forum, Dr. Al Jaber, who is also the Minister of Industry and Advanced Technology, said that the UAE had "a clear sense of responsibility and a great sense of urgency" when it came to hosting COP28 and helping to build global ambition and accelerate action on climate change. He underscored the critical need to make up progress in achieving the goals of the Paris Agreement.

"We don't need to wait for the Global Stocktake to know what it will say. We are way off track. The world is playing catchup when it comes to the key Paris goal of holding global temperatures down to 1.5 degrees. And the hard reality is that to achieve this goal, global emissions must fall 43 per cent by 2030," Dr. Al Jaber said.

While recognising the threat of climate change, Dr. Al Jaber emphasised the immense economic benefits of investing in clean energy and climate action, pointing to the UAE as a success story in that regard.

He noted that the UAE is the host country of the International Renewable Energy Agency (IRENA), the first in the region to commit to the Paris Agreement, and the first to submit a Nationally Determined Contribution, and the first to set out a roadmap to net zero.

"Today, over 70 per cent of our economy is generated outside the oil and gas sector. And as the CEO of ADNOC and the founding CEO and Chairman of Masdar, I will continue to follow our leadership's vision and guidance in making today's energy cleaner while advancing and investing in the clean energies of tomorrow. And we will use our experience, ambition and deep network of partnerships to inform our approach to COP28," Dr. Al Jaber said.

Dr. Al Jaber cited the vision of the UAE's President as being instrumental to the country's regional and global leadership in climate action and its role as a global advocate for clean energy.

"Over the last 15 years, the UAE has invested a total of US$50 billion (AED 184 billion) in renewable energy and clean tech globally and plans to invest another US$50 billion in the years ahead."

"We want COP28 to transform systems and accelerate 2030 trajectories through game-changing partnerships, solutions, and outcomes. We want it to be a COP of Solidarity that bridges the Global North and South and includes public and private sectors, scientists and civil society, women and youth. And we want it to be a practical COP, a COP of Action that raises ambitions and moves from goals to implementation across mitigation, adaptation, finance and loss and damage."

On mitigation, Dr. Al Jaber called for scaling up of renewables, nuclear energy, hydrogen, carbon capture, energy efficiency, the least carbon-intensive oil and gas, as well as new technologies yet to be deployed.

"Wind and solar added record growth of 550 gigawatts between 2020 and 2022 and are on course to grow more over the next five years than over the last twenty combined. The market is telling us something. We are at a turning point in history. Low carbon growth is the future. But we must get there much faster.

"We must triple renewable energy generation from 8 to 23 terawatt hours by 2030. We must more than double low carbon hydrogen production to at least 180 million tonnes for hard-to-abate sectors. We also need to transform our food and agriculture systems because we know that agriculture accounts for one-third of global emissions.

"Much greater investment in agri-tech, smarter water use and food production are needed to transform this critical sector alongside all others. And we need to do all this in an accelerated time frame against a fast-approaching deadline. Our world is on its way to being home to 9.7 billion people by 2050 and will have to produce 30 per cent more energy than today. And as long as the world still uses hydrocarbons, we must ensure they are the least carbon-intensive possible," Dr. Al Jaber said, as he stressed the need to focus on holding back emissions, not progress.

On adaptation, Dr. Al Jaber said we must do more to protect our most vulnerable communities and our most critical systems from extreme weather and biodiversity loss. He also stressed the need to invest in nature-based solutions like mangroves that act as powerful carbon sinks while protecting coastlines and preserving natural ecosystems. Furthermore, global food systems need to be resilient to the changing weather patterns that threaten farmers around the world.

Dr. Al Jaber called for adaptation finance for the Global South to be doubled to US$40 billion (AED 147 billion) annually by 2025 to enable this progress. He went on to say that climate finance needs to be more affordable and accessible.

"We need to ensure that every concessional dollar is matched by 2 or 3 dollars of private capital. To make this happen, we need to answer the call from the international community for inclusive reform of the multilateral development banks and international financial institutions. And to encourage this process, the UAE, as chair of the World Bank-IMF development committee, intends to play a proactive, supportive and facilitating role," Dr. Al Jaber said.

On loss and damage, Dr. Al Jaber urged the world to help the most vulnerable to rebuild after climate-related disasters, build on the progress made in Sharm El Sheikh and fully operationalise the loss and damage fund.

Concluding his remarks, Dr. Al Jaber said that the UAE, as hosts of COP28 and at the crossroads of North and South, East and West, will listen, engage with all those who want to engage, build bridges and pursue global consensus in this collective effort.

"Alongside the UN Climate Change High-Level Champion Razan Al Mubarak and Youth Climate Champion Shamma Al Mazrui, we will work very closely with the UNFCCC [United Nations Framework Convention on Climate Change] to move from ambition to action. And we will mobilise the private sector and all other sectors to deliver a greater impact. So let me extend an open invitation to all parties across government, the private sector and civil society. Cooperate, collaborate, share your ideas and talk to us. Together, let's create a paradigm shift for tangible progress. And let's remember that reaching net-zero emissions will deliver the biggest market transformation with the greatest economic and human promise since the First Industrial Revolution," Dr. Al Jaber said.

The Atlantic Council Global Energy Forum convenes the world's top energy and foreign policy decision-makers annually to examine the changing energy system's longer-term geopolitical and geo-economic implications. The forum is held as part of the Abu Dhabi Sustainability Week (ADSW) in partnership with the UAE Ministry of Energy and Infrastructure, ADNOC and Mubadala.